Hey, I haven't seen a lot posted here lately, but I just wanted to let people know that my webcomic, Zip and Li'l Bit, has started posting again with my second story, The Sky Kayak. If anyone gets a chance, check it out at:

So. August is half over. What happened? Well I suffered DeathCold 2007 in the middle of a record breaking heat wave. It was seriously of The Suck and it delayed me quite a bit in getting pages done and I'm still trying to shake a cough. I also retooled a LOT (read ALL) of my previous pages of this project. And since it's been a while since last update I'm just going to drop them all here to save you a few mouseclicks and missing context. Also included is a handful of bonus studies I'm rather smitten with.

A little forewarning is there's some bad words spoken, and at one point a character busts into a single panel of crude humor but we're all adults here but if you're sooper Right Wing Flowers and Bunnies all the time and can't take a PG-13 rating then for the love of god avert your delicate eyes.

For that matter don't breed either. :>

Bonus! Me rocking out in my sketchbook and making the cast make silly faces!

Hope you guys do enjoy. :> And wish me luck to finish the next set of pages I have lined up!
I'm working on a second story for my comic, Zip and Li'l Bit. It's called The Sky Kayak. I'm planning to start posting it on September 16th, but I've been dying to post some of the stuff I've been working on so I thought I'd share some of the panels that I've been drawing recently. I work pretty big, so each one of these is drawn out at about 8 inches square. I usually scan everything in after I've inked it and assemble the pages and add color and text in Photoshop.

The first story I did with these characters is called The Upside-Down Me. It's online now at: http://www.zipandbit.com

Also, myself and some of the other guys at a site I'm part of called Lunchbox Funnies are going to be doing guest strips for PvP this week. Not sure when mine will post, but check it out if you can.

Hello again, my fellow internet denizens! I have some more junk I want to show you. I'm trying to get my comic ready to put on my website, so I'd like it if you would tell me what you think of the size, the tones, and anything else you think is important for online legibility. Along with, of course, whatever else you think about it. There's quite a few pages, so I'm going to link them.

I have the Brand Spanking new Phineus: Boy Wizard up as a sneek preview! Just click the button below and check it out!

I have the first 9 pages of my story up HERE. Below is page 6. 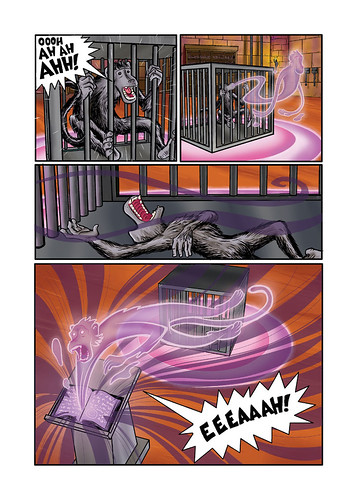 2 more things.
1: Indy & Trade, it was great to see you at Mocca. (My name seems woefully common now)
And 2: more of you need to start posting stuff here. Sketches, finished work, whatever. Let's see what you're working on.
You are working aren't you?

Hello and howdy doo, I've been a long time lurker, occasional commenter, and now I figured I should post something. :> Name's Megs and I've been seen around the internet in some form or fashion as 'Westbaylen' or this very newly changed over LJ handle of 'A Different Drum' (Peter Gabriel for the win yo~). I also run Nomad Chronicle which is one quarter theatrical three quarters portfolio site.

A little about me I'm a SCAD-Atlanta student, Sequential Art major, and Comics Editor of our student paper The Connector. My rather geeky claim to fame is doing the first and (so far) only doujinshi for ABC's Lost which was pretty much drawn on a dare (yessir that's my story and I'm sticking to it) where boys do bad touching and the producers due to the powers of the intarwebs found it, liked it, and a 50 pound heavier version of me appears on the Lost Season 2 DVDs with a snippet of my art and a thirty second glimpse of my face and a very tacky red Dharma Initiative vest. (I love that thing ._.;;;;) Also if morbidly curious you can find the doujin online and in it's entirety following a link in my user info.

A second project that I persued which went to print in The Connector is the comic Yearbook: Momentary Thing which was a kind of coming of age story set against the backdrop of superheroes in highschool. Golly who hasn't done that genre before but I confess my weakness for it. It's YMT however that ends up being a prelude into what's under the cut. Please see the below the new thing that keeps me up nights and invades my brain a little something I call 10-9.

Hey everyone, I want a little advice.
Do you think it's better to have many or fewer panels per page? That is to say, suppose I have a choice whether to make a scene 2 pages with smaller panels, or 3 pages with larger panels. Larger panels make it easier to read, but more stuff on one page seems to slow things down, which I like.
Well, any opinions?

I had some post cards printed up to promote my comic "Haunted". I'll be handing them out at MOCCA in 2 weeks. And then use them at subsequent conventions and comic shops.

I'm timing the official debut of the web comic for "Haunted" to coincide with MOCCA. There will be a 9 page prologue to get people interested. I'll be using the month of July to promote the site. Then in August I'll begin weekly updates.

If you're sneaky you can probably figure out the website which is already up with the preview. And I bought a replica of a baboon skull to have on the table at conventions. (There's a baboon in the story. it's not completely random.) I thought it would be cool to put post cards in its mouth. Unfortunately it's fused shut. But it still looks cool, if not a bit creepy.